It’s the day after Christmas. I’m going through boxes and boxes of material about Norton Motorsports and the American Norton. At the same time, I’ve got footage transcoding from one format to another from the DSLR camera. It’s pretty busy for a holiday and probably a good time to reflect on how this all happened. 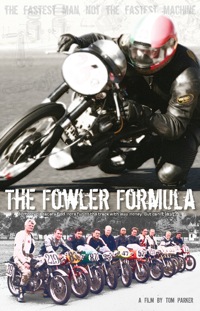 At the end of 2009 I directed my first film, a short documentary called The Fowler Formula. I made it in the DIY Documentary Workshop at NW Documentary, a non-profit in Portland that promotes non-fiction filmmaking. (If you’re interested in seeing it, drop me a line with your email address and I’ll send you details on how you can check it out online.) Making it was a blast and a lot of people really seemed to enjoy it. I was hooked. I really wanted to make another film.

One of the people who liked The Fowler Formula was Dave Friesen. Dave was a member of the Portland Vintage Motorcyclists mailing list that I run. We’d met in person a few times and he’d helped with some repair work on my BMW R100GS PD. So motorcycle friends at the very least and someone whose opinion I’d come to trust. And early this year, Dave me a Facebook message that said, “I know what your next film should be.”

I waited. And waited. “And what is that, ” I messaged back.

“The Norton story. The Portland one.”

I’ve been riding motorcycles since I was twelve years old. I’ve always loved all kinds of motorcycles but I’ve only owned Japanese and German. The most exotic thing I’ve ridden is probably an old Laverda loaned to me by Rick Lefauve. (And with its swapped foot controls, I suspected that was just an attempt to kill me.) I knew some Norton history as a fan of old motorcycles — it’s Norton, after all — but that was it. I was peripherally aware of various attempts to revive the brand over the years but didn’t know anything about a Portland connection.

“Portland? A Portland Norton?” Dave sent me some links and I started reading. This was a pretty good story. And I read some more and thought, no, this is a great story. One of the oldest, best known brands in the world. A painful history of false starts to bring it back from the dead. Some beautiful, artistic restoration work that begat a high-end, heavily-modified rebuilt line of Norton motorcycles that captured the attention of the industry. And finally, a small team of dedicated motorcyclists trying to realize a dream of an all-new Norton that lives up to its legacy.

So how do we get ahold of Kenny Dreer? We started talking to people about getting an introduction to Kenny but didn’t have much luck. Then I mentioned the project to one of the guys I interviewed for The Fowler Formula and he looked at me kind of funny. “You know Paul, Semo and Patrick all worked for Norton, right?”

No, actually, I didn’t know that. So it was kismet. Fate. Destiny. Simon-Pierre “Semo” Smith sent an email introducing me to Kenny and within a few days we had a phone call to talk about the project. He agreed to meet with Dave and me.

If I wasn’t sure before that meeting, I was after I met Kenny. I knew I had to tell this story. Kenny’s a wonderful storyteller, full of energy and frank, candid moments. He regaled us with tales of his early days in Pennsylvania, the Vintage Rebuilds days and Norton. Of people around the world who got behind the new Norton. Of customers turned dear friends.

Most of all, Kenny Dreer is incredibly likable. Sitting next to his drag bike in his workshop, listening to his stories, already knowing how it all ended, I found myself rooting for him and his new Norton Commando. I think you will, too.